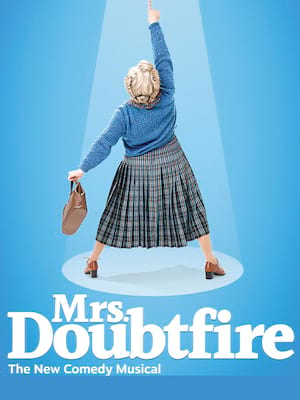 The hit '90s movie is retooled for the stage!

She's the nanny we all wanted in the '90s and now she's back to give the 21st century a spin in this brand new musical adaptation of the beloved 1993 classic. Direct from Broadway, this glorious production captures the film's original fun and chaos - with added theatrical pizazz. Expect hijinks, hoover dancing, and heart a-plenty when it touches down at Manchester Opera House in September 2022!

Created by some of the brightest Broadway talents, Mrs. Doubtfire is directed by Jerry Zaks, features a book by Karey Kirkpatrick and John O'Farell and music and lyrics by Wayne and Karey Kirkpatrick. Casting for this run is yet to be announced.

Starring Sally Fields and the late great Robin Williams, Mrs. Doubtfire was an instant hit on its release, capturing audiences hearts with the story of Daniel, a recently divorced dad who comes up with a novel way to spend more time with his kids - becoming their elderly Scottish nanny - Mrs. Euphegenia Doubtfire! Charming his way into their lives, he soon becomes a fixture. But when questions start to arise about just who this Mrs. Doubtfire is, it looks like he's gonna need a lot more than a makeover to hide from this fallout.

Approximately 2 hours and 40 minutes including one intermission

Sound good to you? Share this page on social media and let your friends know about Mrs. Doubtfire at Manchester Opera House.