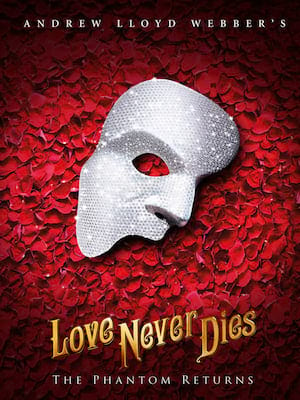 Beautiful and haunting. This new production is astounding

THE ULTIMATE STORY OF LOVE AND BETRAYAL

Andrew Lloyd Weber's critically acclaimed return to the world of Christine Dae, as well as the love triangle between the enchanting opera singer, her Phantom tutor and the dashing viscount Raoul, is set to cast its spell across the UK on a hotly anticipated regional tour this Autumn. Featuring a score by the musical theatre impresario, book by Ben Elton, and lyrics by Tony winner Glenn Slater, the emotionally packed sequel to the universally acclaimed Phantom of the Opera promises thrills, chills and more!

WHAt is love never dies ABOUT?

Set ten years after Phantom of the Opera and relocated to New York's Coney Island, we find that the Phantom has reinvented himself as Mr. Y, and runs a circus of curiosities called Phantasma. Still bewitched by Christine (the heroine of the original show) The Phantom invites her to sing at Phantasma as the main attraction. Having no idea that Mr. Y is the Phantom she arrives with her husband, Raoul, now gripped by bile and alcohol, along with Gustave, the ten-year-old son.

It is not long before the Phantom reveals himself to Christine and confesses that his undying love for her is stronger than ever. Christine must face her dilemma and make a choice, Raoul or the Phantom.

The stakes are upped when The Phantom hears Gustave sing and is left certain that he is the boy's father. Raoul discovers Mr. Y's true identity and the two confront each other, culminating with the two men making a bet. If Christine sings on the last night of the season, she will belong to The Phantom, if not, she will be Raoul's. But there is another alternative that neither men bargained for...

Please note: The above image is from a past production of Love Never Dies.

Sound good to you? Share this page on social media and let your friends know about Love Never Dies at Manchester Opera House.