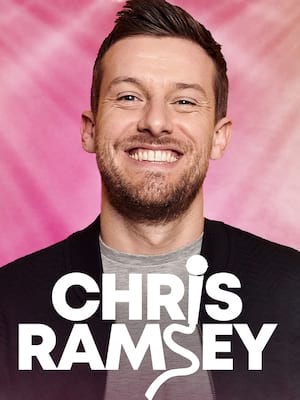 Hailing from South Shields, Tyne and Wear, critically acclaimed comic Chris Ramsey parlayed success on the stage into TV stardom during his over a decade long career in showbusiness. Beginning as the host of a New Castle upon Tyne open-mic night in 2007, he took his first solo show to the Edinburgh Fringe in 2010 and hasn't looked back ever since. You may have seen him in shows like Live at The Apollo, 8 Out of 10 Cats and Strictly Come Dancing, as well as his very own comedy production The Chris Ramsey Show.

Gearing up for furthered mainstream success, Ramsey hits the road on his biggest stand-up tour to date. A whirlwind of hyperbole and positive energy, the celebrated funnyman puts everything he has into his routines, regaling the crowd with tales of his marital life, amusing memories, and general working-class relatability.  His loud, physical performances are bolstered by cleverly crafted story-telling and punchlines, making for a delightful evening of rolling in the aisles.

Sound good to you? Share this page on social media and let your friends know about Chris Ramsey at Manchester Opera House.