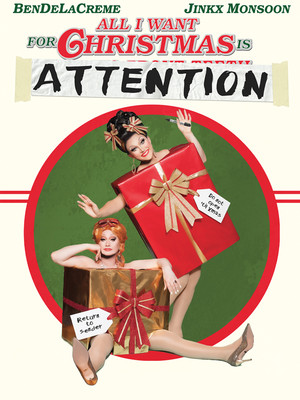 Jinkx Monsoon is blessed with charisma, uniqueness, nerve and talent.

Why See BenDeLaCreme and Jinkx Monsoon?

Santa may be making a list and checking it twice, but those naughty ones among us deserve a little gift too! Troublemakers of all shapes and sizes are welcome at Ru Paul's Drag Race royalty BenDelaCreme and Jinkx Monsoon's brand new festive spectacular; All I Want For Christmas is Attention.

If it's anything like 2018's To Jesus, Thanks For Everything, you can expect a show that promises boozy holiday cheer infused with good old razzle-dazzle song and dance numbers, copious amounts of eggnog and classic carols with a cheeky drag twist. If you're Nutcracker-phobic than this double act has your alternative holiday entertainment sorted, Jinkx will spice things up and Dela will cover them in sugar!

Winner of the fifth season of RPDR, Jinkx earned the golden spotlight by staying true to her comedy roots and character-driven concept, calling to mind the vaudeville performers of old with a touch of Lucille Ball and Carol Burnett. Dela also came to national attention on the popular televised drag contest, and shares Jinkx's artful comedy/vintage style. In fact, the similarities don't just end there, since they both hail from Seattle and are both outspoken political commentators. Yass Queens!

Sound good to you? Share this page on social media and let your friends know about BenDeLaCreme and Jinkx Monsoon at Manchester Palace Theatre.